While there are plenty of cards in Modern Horizons that are screaming to be built around, there are also some cards that are obvious upgrades to existing meta decks.

Scale Up is an incredible pump spell for Infect. A hand as simple as Glistener Elf into Scale Up plus either Groundswell or Might of Old Krosa is by far the easiest and most consistent turn 2 kill in Modern. Unlike Become Immense, Scale Up is ready to go for a single mana as soon as you can attack. The only downsides are that it could be slightly awkward if drawn in multiples and its sorcery speed. However, in order to threaten lethal this deck always needed to choose a pump spell to lead with, so it might as well be Scale Up during your main phase. 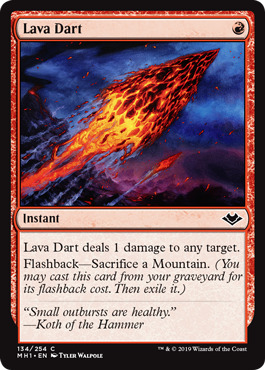 Lava Dart is a card that looks innocuous at first glance, but actually fits perfectly into the already popular Arclight Phoenix strategies. Gut Shot is already seeing regular play as a free spell with a plethora of targets among popular decks such as Noble Hierarch, Thalia, Guardian of Thraben, or Steel Overseer. Lava Dart, while not strictly better, will often be an upgrade as a more flexible option for casting two separate spells. It also goes a long way towards enabling Pyromancer Ascension quite easily.

Lava Dart is potentially an even bigger upgrade in the Mono Red version of Arclight Phoenix. This is a deck that plays 8 1-drop creatures with Prowess (as well Bedlam Reveler). This deck will have no problem clearing small blockers out of the way, and your opponents will be put to the test with any remaining blockers even if you are seemingly tapped out.

Since this version of the deck is so aggressive, we should be able to include several copies of Fiery Islet. This concept brings us to the deck that seems to benefit the most from the new Horizon Canopy cycle: Burn. 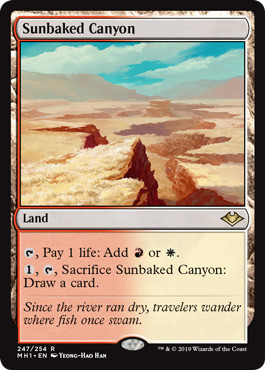 Burn is essentially a combo deck that simply needs to assemble its "combination" of any seven of its spells and it ends the game. The most common way for Burn to lose is through simply drawing too many lands to find a combination that adds up to 20. Sunbaked Canyon (and potentially 1-2 copies of Fiery Islet) drastically reduces the virtual land count of the deck and thus the risk of flooding. Playtesting will determine the correct number of Fiery Islet to include, as too much life loss combined with Eidolon of the Great Revel could prove costly in some matchups.