Aria of Flame is one of the cool build-around cards from Modern Horizons that happens to fit perfectly as a backup (or easier) win condition in Modern Storm.

Modern Storm with Aria of Flame

Credit for this list goes to SERAPHIC_DEMON on Magic Online.

The best part about Aria of Flame in Storm is that it shores up the deck's vulnerabilities. This is a deck that can combo as early as turn 3, but to do so relies on its vulnerable 2-toughness creatures. Aria of Flame represents a backup win condition that is more difficult to interact with. Even if you can't fully combo in one turn, just digging through your deck on its own will kill your opponent quickly. Casting any 7 spells after resolving Aria of Flame will kill most opponents (28 damage plus any fetch/shockland damage), but 8 spells will almost always finish the job. This is trivial in a deck that is designed to either be casting cantrips to find rituals or casting rituals to storm off.

Another benefit to Aria of Flame is its ability to deal with Planeswalkers. Narset, Parter of Veils is seeing increasing play in Modern in decks like Blue-White Control. Its static ability is normally a huge roadblock for decks relying on high numbers of cantrips (though Opt can still help dig for answers), but Aria of Flame compleyely shuts down access to opposing planeswalkers while it remains on the table. This isn't to say that Blue-White Control can't deal with enchantments, but it's nice to have some outs to a card that could otherwise be a huge speed bump. 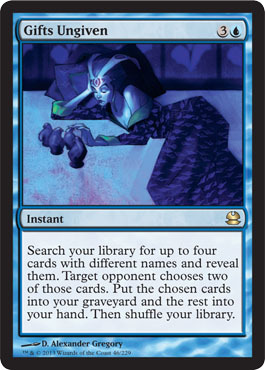 Past in Flames and Gifts Ungiven are the traditional engines of Storm, though they both rely on the graveyard for full functionality. With increased focus on graveyard hate due to the current Hogaak Bridgevine menace, it is nice that Aria of Flame represents a stronger backup win condition than Empty the Warrens that does not use the graveyard. It is also very capable of winning through hate cards such as Damping Sphere that would prevent a full storm turn but only slow you down a bit from casting 8 spells.