Simic Flash is a deck from the pre-Thrones of Eldraine Standard metagame that looks to be gaining more than it's losing with the rotation. Its heavy-hitters of Brineborn Cutthroat and Nightpack Ambusher remain, and the strategy gains two awesome new cards in the form of Wildborn Preserver and Brazen Borrower. 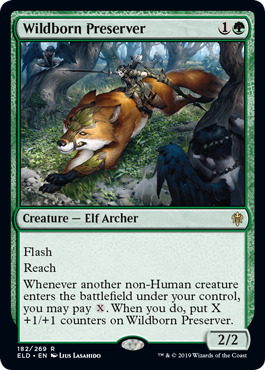 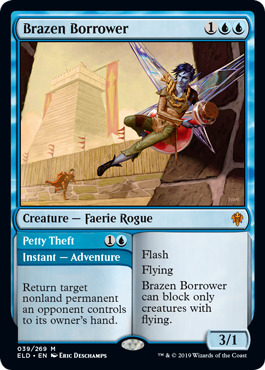 Let's take a look at our day 1 decklist:

Simic Flash with Throne of Eldraine

The core of this strategy remains the same: play a land, say go, and react to your opponent's plays. If they ever have a turn where you don't particularly care about what they've done, you get to stick an above-rate creature that can control the game on its own. Your opponents are stuck making difficult decisions every turn while you have perfect information on how each turn will play out. 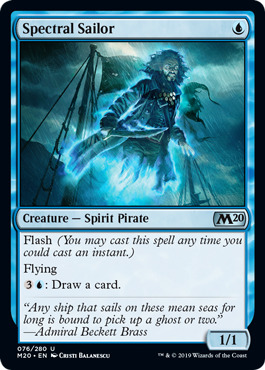 Spectral Sailor was already included in this archetype as it lets your Frilled Mystic mana always represent an advantage, but with Wildborn Preserver it is incredible. All of your extra mana that turn can go into pumping the 2-drop into a massive creature, and this can happen at instant speed as a combat trick.

Unsummon is already an effect that this deck wanted, since it can negate any tempo disadvantage against creatures that may have slipped through the wall of counterspells. Regardless of whether or not Brazen Borrower "feels" like it should be a Mythic Rare, it's still very powerful. It provides a lot of flexibility at no cost, and even does away with the card disadvantage typically associated with bounce spells. You can bounce a problematic permanent and "draw" the card that is its second half. You can also just treat the creature half as a curve-out threat that beats down like Vendilion Clique has been doing to Legacy players for years. It's also cool that if your opponent ever plays removal spell on your 3/1 flier, you could potentially use Unsummon to counter the removal spell and still have the Petty Theft side ready to be cast again. (Aside: not only is it somewhat weird that Brazen Borrower is a mythic other than evoking a Legacy staple, it's weird that "Petty Theft" and "Brazen Borrower" both imply stealing things from your opponent, yet neither does. Maybe this card was changed drastically right before seeing print?)

Check out our video that proves how awesome Simic Flash is in the new metagame!