Leyline of Abundance and Nykthos, Shrine of Nyx combine perfectly to make mono green devotion a very powerful ramp strategy to try in Pioneer. It's possible to generate insane amounts of mana very quickly, and then you can pretty much do whatever you want. 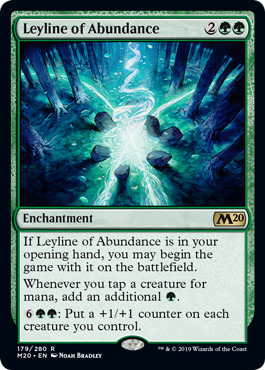 Leyline of Abundance is an awesome ramp card for our mana dorks, but it also provides two free devotion for Nykthos, Shrine to Nyx. Nykthos was already a ridiculous mana generator long before Leyline of Abundance was even printed, but they combine perfectly to ensure that you come out of the gates with a ton of mana very early in every game. Leyline of Abundance is also a card that greatly benefits from the London mulligan rule, letting you see so many more cards in your opening hands.

Burning-Tree Emissary is simply a free 2/2 that does not contribute much on its own, but when we have access to Nykthos it creates some of our most broken draws, basically pushing us ahead almost a full turn. Hmm, if only there was a card that could help up find either half of a creature and land combo.

Once Upon a Time is pretty broken in quite a few decks, but it seems even better than usual here.  It gives us so many more virtual copies of Nykthos, it can ensure that we find a mana dork on the first turn, or it can find us one of our finishers when we're able to generate tons of mana. Once Upon a Time is at its best when the cards it can find play greatly differing roles, and a ramp deck is definitely one of the best ways to accomplish this. Oath of Nissa plays a similar but less powerful role, though it can find our planeswalkers and also contributes to devotion. 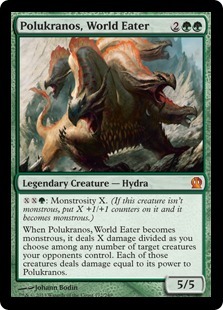 Polukranos and Questing Beast are our current frontrunners for best 4-drops that green has to offer in Pioneer. Polukranos has a higher ceiling since it is great as a mana sink, but investing an entire turn into its monstrous ability has the potential to backfire in the face of interaction. Questing Beast will always give us a scary threat if we are able to drop it super early, so a mix of the two options is likely correct. It's important to be running enough 4-drops as this deck is so good at getting to four mana on the second turn of the game. For this reason we could consider splashing a second color to have access to options such as Xenagos, the Reveler (especially since we have some help on the mana with Oath of Nissa), but for now we've been having success with the Mono Green version that keeps the devotion count high.

Nissa, Who Shakes the World is a card that currently dominates Standard and there's no reason to think it wouldn't do great things in Pioneer where it can be cast much faster. The power level of this card as both a turbo ramp spell and win condition is extremely high and is very hard for opponents to deal with fast enough.

Walking Ballista and Ulamog, the Ceaseless Hunger top out our curve. We want as much of the high-end as possible to be creatures that we can find with Once Upon a Time. Walking Ballista is great since it can often come down with whatever mana we have left over on a given turn as a piece of interaction, and even if we were forced to put it onto the battlefield, if we can keep it alive then it continues to be a mana sink over the course of the game. It's also notably a premium piece of interaction against the Saheeli Rai / Feildar Guardian combo deck, which is something a Mono Green deck might be lacking otherwise. Ulamog is less flexible than the construct, but it gives us much more potential in a longer game so a single copy is certainly justified. 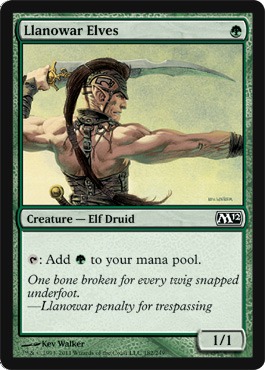 When we were creating our comprehensive list of playable green cards for the Pioneer format, one thing that we noticed is that other than Gilded Goose, Elvish Mystic and Llanowar Elves were the only 1-mana ramp creatures available. Many decks that would seek to cast powerful 3-drops on turn 2 cannot take advantage of these creatures reliably due to inconsistent mana, so going big with mono green seems like a great way to go.