Ayara, First of Locthwain is begging us to build a mono black deck for Throne of Eldraine Standard. We have access to a ton of synergies that want us to put lots of tiny black creatures into play.

Ayara has a heavy casting cost requirement, but that's OK because there's plenty of options in mono black anyway! Ayara serves as a card draw engine that also plays right into our gameplan of draining our opponent to death. If any of our assortment of creatures ever connect for combat damage, we'll have an easy time draining them the rest of the way.

The Cauldron Familiar and Witch's Oven combo that we've been writing about in a ton of our theory-crafting decks such as Orzhov Witch's Oven and Zeros Combo is as good as advertised. This is yet another deck that loves to take advantage of a nontoken creature repeatedly dying and entering the battlefield. The incremental drain works perfectly in concert with Ayara to give this deck considerable reach.

Midnight Reaper is an all-star in this deck, ensuring that we have enough gas to get the job done. While its synergy with the aforementioned Witch's Oven combo is obvious, we have tons of other ways to sacrifice our small nontoken creatures as well. Priest of Forgotten Gods is another proven staple in this type of deck, giving us a little bit more interaction while also contributing even more to draining our opponent's life total. 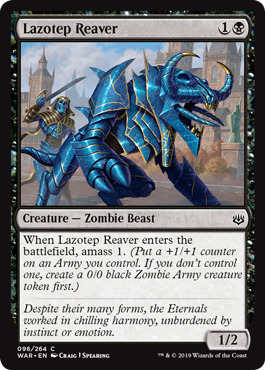 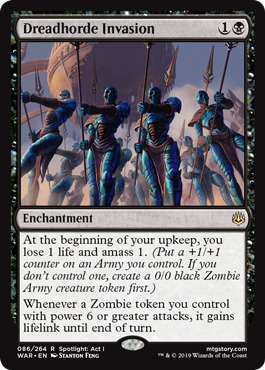 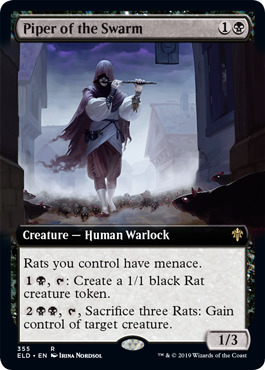 Gutterbones does a good job at getting in some damage early and being a recursive way to ensure that we always have black creatures to sacrifice. Lazotep Reaver and Dreadhorde Invasion are similar, but we want to avoid having too many copies of amass cards in our deck, since if we don't have a way to cash in on the 1/1 token they don't really contribute much as just a slightly bigger zombie. We do have plenty of ways to sacrifice creatures though, so it's possible that we should be running higher numbers of Dreadhorde Invasion. Piper of the Swarm is a neat new card that can let us generate more tokens and potentially have a big effect if you are ever able to steal a creature in a drawn out game.

Murderous Rider is simply an amazing card that deserves being played in just about any black deck in Standard. It's nice that we get to include some premium removal in our synergy deck and still keep our creature count extremely high. Murderous Rider ensure that you always have something to do with your mana.

The castle cycle has proven to be very impressive, and Castle Locthwain is definitely in contention for the best of the bunch. Since we're mono black we're able to run several copies of this card at no cost, ensuring that it's almost impossible for us to flood out. We should generally be pretty good at emptying our hand, but the life loss from cards like this and Midnight Reaper is pretty easily offset by the lifegain anyway. 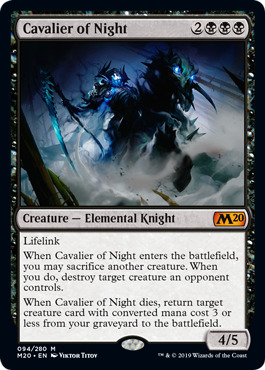 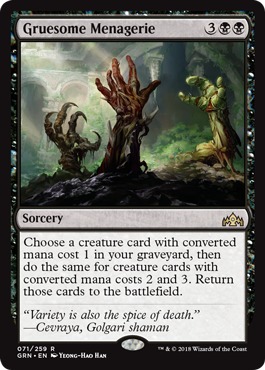 We've filled out the last 4 slots with some super powerful 5-drops, though we need more testing to determine if these should be shaved down for a leaner curve. Cavalier of Night plays very well with our general strategy and gives us just a bit more interaction. Gruesome Menagerie should probably spell game over if it ever resolves for the full three creatures, but it doesn't do anything in the early turns so we want to avoid playing too many copies. It's worth noting that Priest of Forgotten Gods does a lot of work to help support casting these expensive spells. We could also consider playing Liliana, Dreadhorde General for this reason, but though it is extremely powerful the payoff might not be high enough when so many copies of Murderous Rider are running around.

Check out a quick video we made playing Mono Black Ayara on Arena: